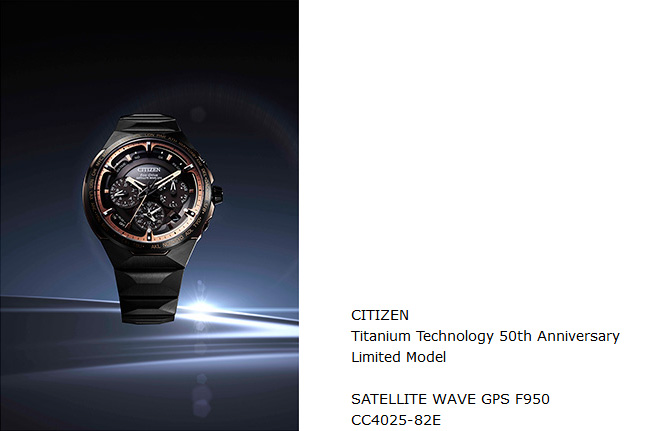 Titanium was the favored construction material used in the Apollo spacecrafts in the 1960s due to its lightweight and rust-resistant properties. The material is also uniquely biocompatible and less likely to cause metal allergy reactions to the human body. CITIZEN quickly realized the potential of the material for a new generation of watches, and created the X-8 Chronometer model in 1970, which became the world’s first titanium watch. While titanium material offers many advantages in watch construction, the metal is prone to stick to the mold when subject to pressure of a hundred or more tons, resulting in deformation, and has a softer surface than stainless steel which is easily scratched. In 2000, CITIZEN overcame these challenges by developing Super Titanium™*1 – its own surface treatment and titanium processing technologies that offered nearly five times the surface hardness of stainless steel, as well as a wide variety of color variations, and smooth, mirror-like finish.

Marking the 50th anniversary since the release of the world’s first titanium watch, CITIZEN proudly announces the 50th Anniversary Model of CITIZEN Titanium Technology as a culmination of titanium innovation.

This model inherits the “space” design concept of the “SATELLITE WAVE GPS F100” released in 2014 and “SATELLITE WAVE GPS F900” in 2015, respectively, while making full use of CITIZEN's exclusive titanium-processing technologies to further advance innovation. The case and band feature pronounced three-dimensional surfaces with edgy, straight lines that create a symmetrical profile shape of angles and shadows. The black dial comprises a multi-layered structure with six parts stacked on top of one another, evoking the image of the endless depths of outer space. The case conveys a sense of refinement by combining two parts from CITIZEN's unique surface hardening technology, “Duratect*2 DLC” and “Duratect Sakura Pink”.

Caliber F950 is featured in this top-of-the-line movement Eco-Drive GPS SATELLITE WAVE*3. With reception of exclusive time signal, this advanced movement has the ability to receive GPS satellite signals at the world's fastest speed of within 3 seconds, and offers remarkably fast watch hand movements through a high-speed twin-coil motor that’s capable of rotating the second hand 360° forward or reverse in a single second. This unprecedented speed streamlines the process from reception to completion seamlessly. 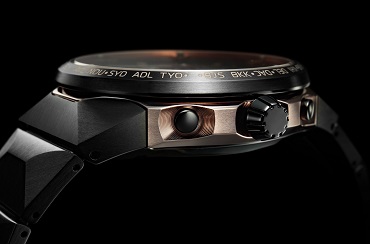 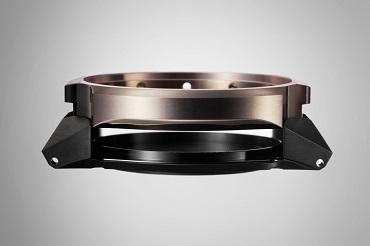 The new model utilizes SuperTitanium™, which is the same material that will be used in Japan’s lunar exploration project, “HAKUTO-R*4”. While inheriting the design concept “Space” from the 2014 SATELLITE WAVE GPS F100 and the 2015 SATELLITE WAVE GPS F900, the new design idea is further advanced through the use of CITIZEN’s proprietary titanium processing technologies to create a multi-layer, six-part stacked dial that envisions the depth of the endless universe.

Centering on CITIZEN’s titanium-processing technology cultivated and advanced over decades, the case and band feature edgy, straight lines that form a three-dimensional surface, creating a stunning sculpted shape of angles and shadows.

Representing the 50th anniversary of the world’s first titanium watch, the new F950 model features a combination of Duratect DLC and Sakura Pink that produces a cultivated finish. The dual-case structure is the result of precision processing technologies developed over decades of innovation.

Cal.F950 is the top-of-the-line Eco-Drive GPS SATELLITE WAVE movement using light as a power source and an innovative satellite reception technology that was pioneered by CITIZEN. With exclusive reception of time data, this advanced movement has the ability to receive GPS satellite signals at the world's fastest speed of within 3 seconds, and offers remarkably fast watch hand movements through a high-speed twin-coil motor that’s capable of rotating second hand 360° forward or reverse in a single second. This unprecedented speed streamlines the process from reception to completion seamlessly. 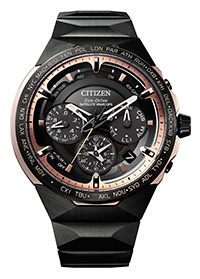 1970 - World’s first titanium wristwatch released
X-8 chronometer
The world's first titanium watch used titanium with a purity of 99.6% for the case. The “X-8” product name comes from a combination of “x” signifying the “unknown” and “8”, the infinite symbol of “∞” turned sideways to portray infinite possibilities of titanium.

1987 New technology development with soft brilliance
ATTESA first model released
The first model “ATTESA” elevated the texture of titanium to a new level. Known to be difficult to polish to a mirror-like shine, titanium metal is normally used for outdoor watches for a rough, matte surface texture look. ATTESA is the first genuine business watch to introduce the new surface treatment process that creates a refined, polished look with a beautiful luster. It is also hypo-allergic.

2. Lightweight
Weighing only 60% of stainless steel, the material is surprisingly lightweight and feels like a part of your body, allowing you to wear it all day long without fatigue or stress.

4. Rust-resistant
Super Titanium™ will not rust from contact with fresh water, seawater, or sweat. Since there is no worry about rust or loss of its natural shine, outdoor enthusiasts and wearers who work with water can use it with peace of mind.

5. Rich color variations
Unlike untreated titanium, Super Titanium™ enables the creation of a wide variety of color tones such as silver, black, gold, and even pink gold. The design possibilities for watches are now virtually infinite.

*1 Super Titanium™ is CITIZEN’s proprietary technology to treat solid titanium with surface hardening technology. It is at least 5 times harder than stainless steel, resistant to scratches, lightweight and gentle to the skin for comfortable wearing.

*2 Duratect is CITIZEN’s proprietary surface hardening technology that enhances the surface hardness of metals such as stainless steel and titanium, protecting watch bodies from scratches and damage. This technology offers excellent abrasion quality and maintains lustre of metals for long periods of time.

*3 Eco-Drive is CITIZEN’s proprietary technology that powers watches using any natural or artificial light source, eliminating the need to replace batteries. Certified as an Eco Mark product for the first time in the watch industry. GPS satellite-synchronized watch captures the date and time signals sent by GPS satellites from space — orbiting 20,000 kilometers above the Earth — bringing ultra-precise timekeeping to wherever people are on the face of the globe.

*4 HAKUTO-R: HAKUTO-R is a program that coordinates two lunar exploration missions by iSpace Inc scheduled for 2021 and 2023. Developing its own lander and rover, it will make a lunar landing in 2021 and lunar exploration in 2023 using the SpaceX’s Falcon 9.

CITIZEN WATCH is a true manufacture d'horlogerie with a comprehensive manufacturing process that extends from creating a watch’ s individual components to its final assembly. The company operates in more than 130 countries around the world. Since its founding in 1918, CITIZEN have held the belief of “Better Starts Now” — that is, no matter who you are and what you do, it is always possible to make something better, and now is the time to start doing it. Sharing this belief, we have made watches, invented and improved technologies and explored the future of watches such as our proprietary light-powered Eco-Drive technology and state-of-the-art satellite-synchronized timekeeping.

In 1970, CITIZEN launched the world’s first titanium watch. In 2020, we celebrate the 50th anniversary of titanium technology development. Believing in the potential of titanium, CITIZEN continues to evolve and refining this technology as it has for a half-century. Highly scratch resistant, rust-proof, lightweight, and skin-friendly, Super Titanium™ is also going to be used in commercial lunar exploration program. Titanium Technology 50th Anniversary Special Website conveys the future prospects of Super Titanium™.

*The final design and specifications are subject to change without notice.
*Eco-Drive, Super Titanium™, Duratect are trademarks or registered trademarks of Citizen Watch Co., Ltd.
*The availability, specifications and related information such as product code for the models featured in this site, may vary by markets. If you would like to know more details, including the availability of this products in your area, please select your “Local Website” from our global site.