CITIZEN is proud to announce the grand opening of the LIGHT is TIME CITIZEN interactive museum website on Wednesday, 10 June. The LIGHT is TIME website presents a fascinating look at the series of LIGHT is TIME installations that began at Baselworld 2013 to convey the appeal of the CITIZEN brand to a broader audience. This series is a part of CITIZEN’s continuing pursuit of the future of watches based on our simple belief that “Better Starts Now”. 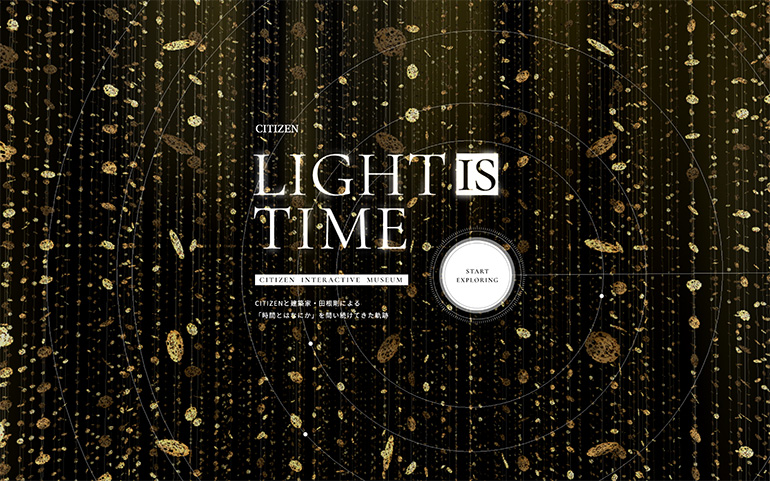 Since its founding in 1918, CITIZEN has dedicated itself to providing quality watches to people all over the world. The company has consistently opened up new possibilities in watchmaking over the years, continuing to launch new, innovative models while constantly considering the nature of time itself.

The LIGHT is TIME installations were inspired by CITIZEN’s proprietary light-powered Eco-Drive*1 technology. Together with Tsuyoshi Tane, CITIZEN focused the spotlight on a particular watch component – the base plate. Base plates are the foundation of any watch movement, and CITIZEN’s base plates (all manufactured in-house) are proof of the company’s status as a manufacture d’horlogerie. This concept led to the creation of the first groundbreaking LIGHT is TIME installation at Baselworld 2013, providing a visual expression of the concept of time and its relation to light.

The new LIGHT is TIME website is CITIZEN’s interactive museum showcasing installations at events including the global trade event Baselworld and the international design festival Milan Design Week. The installations were also experienced by numerous visitors in Japan through the Milan Design Week 2014 Homecoming Exhibition and other events. This new website presents an archive of these exhibits, communicating the breathtaking appeal and impact of the LIGHT is TIME installations. Other featured content includes information about watch models exhibited at the venues, and various performances. The combination of video, visuals, and the otherworldly atmosphere of the installations is provided in the form of a virtual experience that is almost like being there. The advantages of the website format are utilized to allow visitors to freely explore the installations in 3D from a range of different perspectives.

In 1976, CITIZEN developed the light-powered technology, Eco-Drive – a technology that turns light into the energy that enables watches to keep time. As long as there is a light source, Eco-Drive watches will keep running anywhere, anytime. This unique concept was the inspiration for the installations that explored the relationship between light and time, expressing this connection in an innovative new way. Our exploration of light and time transcends language, and conveys both the appeal of the CITIZEN brand and our dedication to continuing our pursuit of innovation to citizens all over the world.

The LIGHT is TIME installations have enchanted people all over the world. They have been featured at Baselworld (one of the world’s biggest watch trade shows), the design festival Milan Design Week, and the Spiral Hall in Aoyama, Tokyo. This is the chronicle of the pursuit of the nature of time that I began with CITIZEN in 2013. This is the record of our journey so far.

■ Links to the LIGHT is TIME CITIZEN interactive museum website

The LIGHT is TIME CITIZEN interactive museum website provides regular updates to content chronicling the story of time. The website uses selected materials from our vast archives to enhance visitors’ experience and understanding of the appeal of both time and watches, as part of humankind’s quest to understand time itself.

*1 Eco-Drive: Eco-Drive is Citizen’s proprietary technology that powers watches using any natural or artificial light source, eliminating the need to replace batteries. Certified as an Eco Mark product for the first time in the watch industry.

■ Profile: Tsuyoshi Tane
Tsuyoshi Tane is a Japanese architect based in Paris where he founded the architectural practice - Atelier Tsuyoshi Tane Architects (ATTA). Under the concept of “Archaeology of the Future,” which creates architecture from memories of places, ATTA works on various typologies of projects in Europe, Japan and many other countries. He is known for designing many notable buildings including the Estonian National Museum (2016), the Kofun Stadium – New National Stadium Japan (2012), the Hirosaki Museum of Contemporary Art (2020), the Todoroki House in Valley (2018), and the LIGHT is TIME installation(2014). He has received numerous awards including the French Ministry of Culture Architecture Prize (2007), the 67th Japanese Ministry New Face Award at the Minister of Education Awards for Fine Arts (2017), and the AFEX Grand Prix 2016. He was also nominated for the European Union Mies van der Rohe Award in 2017.
ATTA Official Website:
www.at-ta.fr

CITIZEN WATCH is a true manufacture d'horlogerie with a comprehensive manufacturing process that extends from creating a watch’s individual components to its final assembly. The company operates in more than 140 countries around the world. Since its founding in 1918, CITIZEN has maintained the belief of “Better Starts Now” — that is, no matter who you are and what you do, it is always possible to make something better, and now is the time to start doing it. Sharing this belief, we have made watches, invented and improved technologies and explored the future of watches, such as our proprietary light-powered Eco-Drive technology and state-of-the-art satellite-synchronized timekeeping.

* Eco-Drive is a registered trademark of Citizen Watch Co., Ltd.
* Details are correct as of the date of this release. Some details may be subject to change.