CITIZEN is proud to announce the launch of the fourth new Eco-Drive Bluetooth model in stylish navy blue that CITIZEN Brand Ambassador, professional tennis player Naomi Osaka, will be wearing at Wimbledon 2019. The watch will go on sale in Summer 2019.

*Launch dates may vary by country/region. 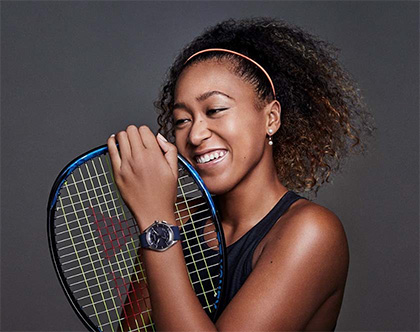 A new portrait of Naomi Osaka,
one of the world’s top athletes in women’s tennis, wearing her stylish navy blue CITIZEN Eco Drive Bluetooth watch.
CITIZEN x Naomi Osaka – Be who you want to be is a perfect fit with CITIZEN’s brand statement: “Better Starts Now” 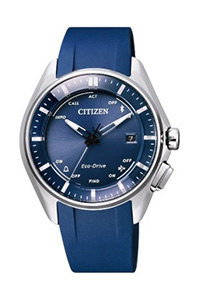 Naomi Osaka will be wearing a new model CITIZEN Eco-Drive Bluetooth*1 watch at Wimbledon 2019 (Monday, 1 July – Sunday, 14 July at the All England Lawn Tennis and Croquet Club). This new unisex model in cool navy blue features a Super Titanium™*2 case, making it incredibly lightweight and comfortable to wear. The design incorporating a stylish navy blue dial, matching watch band, and lightweight titanium case was inspired by Ms. Osaka’s energy and agility, as well as her cool confidence on court.

Since their launch in 2012, CITIZEN Eco-Drive Bluetooth watches have combined cutting-edge technology with beautiful designs, establishing their own position in the connected watch market. Revolutionary light-powered Eco-Drive technology frees wearers from the worry of having to recharge the watch. The intuitive interface of the CITIZEN smartphone app makes it easy to customize a range of settings, including alarms and time sync adjustment.

Since her appointment as CITIZEN Brand Ambassador in August 2018, Naomi Osaka has secured two Grand Slam women’s singles titles – at the 2018 US Open and the 2019 Australian Open – wearing her CITIZEN Eco-Drive Bluetooth watches. Tennis fans all over the world are looking forward to seeing her in action at Wimbledon 2019. CITIZEN continues to support Ms. Osaka, one of the world’s top women’s tennis players, in her pursuit of excellence and her dedication to her sport.

*Eco-Drive is CITIZEN’s proprietary technology that powers watches using any natural or artificial light source, eliminating the need to replace batteries. Certified as an Eco Mark product for the first time in the watch industry.
*2. Super Titanium™ is CITIZEN’s proprietary technology to treat solid titanium with surface hardening technology. It is at least five times harder than stainless steel, resistant to scratches, lightweight and gentle to the skin for comfortable wearing.
*3. Duratect is CITIZEN’s proprietary surface hardening technology that enhances the surface hardness of metals such as stainless steel and titanium, protecting watch bodies from scratches and damage. This technology offers excellent abrasion quality and maintains luster of metals for long periods of time. Duratect DLC achieves Vickers hardness of 1,000-1,400 Hv by coating an amorphous carbon hard film — mainly composed of carbon and hydrogen — on the surface of the material. (Vickers hardness of stainless is approximately 200Hv.)

- About Naomi Osaka
Born on October 16, 1997 in Osaka, Japan to a Haitian father and a Japanese mother. Moved to the U.S. at the age of three and currently resides in Florida. Started out being taught tennis by her father, joined the International Tennis Federation (ITF) tournaments at the age of fourteen, and turned professional in 2013. Qualified for the Women’s Tennis Association (WTA) tour championship in July of 2014 at the Bank of the West Classic for the first time. In January 2016, at the Australian Open, qualified to enter her first Grand Slam, rolling into the third round and rising into the top 100 of the WTA rankings. In the same year, reached the third round of the French Open and US Open as well. In October 2016, at the Toray Pan Pacific Open, reached her first WTA final and moved into the top 40 of WTA rankings. Won “Newcomer of the Year” at the 2016 WTA Awards, an award given to the player who made the biggest breakthrough. In March of 2018, became the first Japanese woman to win the Indian Wells Masters in California, U.S., also known as BNP Paris Open — in the Premier Mandatory category — widely considered the second biggest event in tennis right behind the Grand Slam, joining the ranks of the world’s top players. Won a Grand Slam singles tournament in September 2018 at the US Open. A must-watch up-and-coming player with a powerful serve, Ms. Osaka takes advantage of her 180cm height and forceful forehand. Ranked as the WTA No.2 female tennis player in the world as of 27 June 2019.

• Check out the latest information about Naomi Osaka as our Brand Ambassador on CITIZEN’s special website.

CITIZEN WATCH is a true manufacture d'horlogerie with a comprehensive manufacturing process that extends from creating a watch’s individual components to its final assembly. The company operates in more than 140 countries and regions around the world. Since its founding in 1918, CITIZEN have held the belief of “Better Starts Now” — that is, no matter who you are and what you do, it is always possible to make something better, and now is the time to start doing it. Sharing this belief, we have made watches, invented and improved technologies and explored the future of watches such as our proprietary light-powered Eco-Drive technology and state-of-the-art satellite-synchronized timekeeping.

* The Bluetooth® word mark and logos are registered trademarks owned by Bluetooth SIG, Inc
* Eco-Drive, Super Titanium™, and Duratect are registered trademarks or trademarks of Citizen Watch Co., Ltd.
* All information contained within this News Release is accurate as of 27 Jun 2019.
* The availability and related information such as product code for the models featured in this site, may vary by market. If you would like to know more details, including the availability of these products in your area, please select your “Local Website” from our global site.